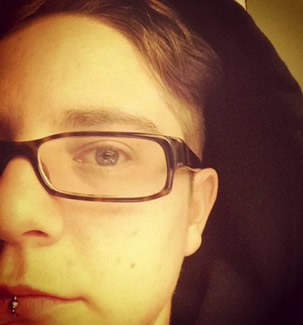 Levi Arithson is a transgender activist, artist, and scholar. A native of Tulsa, Oklahoma, Levi moved to Boulder in 2003 following his graduation from the University of Oklahoma in Norman, Oklahoma where he completed a B.A. in Journalism and Electronic Media. A strong interest in alternative and activist media led him to Boulder and to a production internship at Free Speech TV, one of the nations premiere alternative news networks. In 2008 he joined the team at Out Boulder, Boulder County’s LGBTQ community center, as an assistant in the annual youth filmmaking project; the next year he became the lead instructor. In 2010, following youth interest, the film project was turned into a year-round arts-based program focusing on art as a mode of expression, activism, and empowerment. Levi became the program coordinator and served in this position until July 2014. During this time he also returned to school, pursing a Master of Humanities with a focus on Visual Studies and Gender from the University of Colorado Denver, which he received in the spring of 2014. In his most recent position, he taught a Gay-Straight Alliance elective and served as a mentor and inclusion advocate at Compassion Road Academy. He was also a proud member of the activist theater troupe Vox Feminista from 2004- 2010 participating as a performer, production assistant, and lead videographer. Levi is passionate about media literacy, the power of art, and the possibility of art making to inspire social change and personal growth.

You can reach Levi at larithson@riseupcommunityschool.net.

Top
School has started! If you're still interested in enrolling, please call us.
+ +